Why 10,000 Characters is easier than it seems

Yesterday’s article focused on why speaking Chinese is easier than it seems. Today I’m tackling the biggest fear most foreigners have when they start to learn Chinese, characters.

There are a couple things you need to know about written Chinese before we start.

The first is that the characters have changed in 3 big ways over the last 5,000 years, and so they used to look more like pictures, and less like the things that haunt students’ dreams. 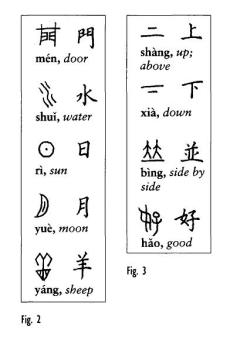 Ancient on the left, Traditional on the right

The second part is that for 3,000 years or so very little changed in the way the characters were written, then in the 1950’s the Communist party “simplified” the characters in an effort to increase literacy (building schools apparently was the second choice). So the characters used on the mainland today are made up of fewer brush strokes, but have also lost some of their meaning compared to the “traditional” characters used in Hong Kong and Taiwan.

Let’s do a quick exercise before we go any further. Pretend you are trying to create a language made entirely of pictures that express every idea (ideograms). So using no more than 5 straight lines for each, try to draw the following: One, Two, Three, Tree, Person.

Here are the Chinese characters 一(one),二(two),三(three),木(tree/wood),人(person). Your drawings probably looked something like that, so sometimes Chinese can be very efficient and the meaning is obvious (once someone tells you). Sadly this makes up only a small fraction of the total number of words, but don’t despair it’s still not as bad as it seems.

Let’s try drawing some more ideograms. This time use as many straight lines as you like and draw: Push, Love, and Red (still with blue or black ink please). 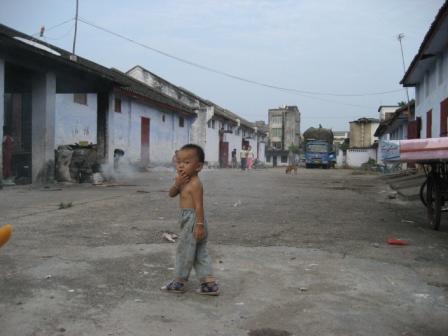 So here they are 推tui(push),爱ai(love), 红hong(red). If yours looked anything like this, I’m calling you a cheater.

It turns out that there are a whole pile of things that are hard to express with a few straight lines. The process of drawing everything became problematic for them, just like it has for you.

So when the creators of the Chinese language ran out of ways to draw colors and other things they couldn’t see, they developed what are known as “radicals” this first part of the character relates to meaning.

The second part of the character refers to how the character sounds. After all in the creation of most languages, writing is usually a reflection of the spoken word. So somebody along the line decided that “stomach” was called “du”, and somebody else said, “well earth is tu(土), so we can add the organ radical (月) and we’ll use that for stomach (肚), unless one of you guys want to volunteer for surgery?” Ah, the birth of a character. 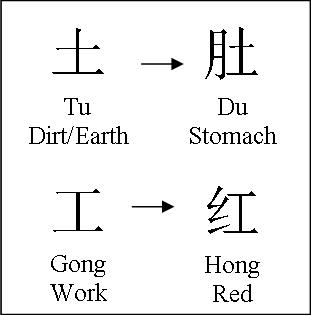 Around this point they decided that this was a much easier way of doing things. So a large chunk of Chinese characters are half meaning, half phonetic. This makes the language much easier to learn, if you can already speak, the problem is that most Chinese classes try and make you learn the pronunciation of the word, the meaning of the word, and how to write the character all at the same time.

So not to be insulting, but another way to think of this process of writing Chinese is in someways similar to playing charades (One word… Sounds like…).

This is a big part of why it’s not so hard to remember all of those words, for each character you learn, it makes learning another one easier. After 500 or so, things start to really pick up speed.

Tomorrow we’re going to be looking at how 750 characters can make up 1300 words (ideas). Also I’ll be trying to answer any questions you might have (just post them below)

I have been working in China for nearly five years now. I have traveled to more than 30 cities and towns, and have lived in 3 provinces. I am interested in issues concerning development in China and the rest of the world. I hope to provide a balanced look at some of the issues facing China as it continues its rise to power.
View all posts by T →
This entry was posted in Chinese Culture & Language. Bookmark the permalink.

9 Responses to Why 10,000 Characters is easier than it seems