My friend happened to be in a supermarket when panic struck here. She was buying her lunch when three loud, pushy women shoved their way to the front of the line, each buying two bags of salt. She thought it was a bit strange, but it is China, and she has seen far stranger. Within the next few minutes the entire store was full of customers grabbing up bags of salt like it was the most precious commodity on Earth. The store opened up 3 more cash registers and the manager declared that there would be no limit on how many bags a person could buy at a time.

Finally my friend asked what all the commotion was about. Why did everyone suddenly need pounds of salt? The clerk calmly explained that the salt would protect them from Japan’s radiation. “Ooooh,” my friend said, as if this explanation had answered more questions than it had raised.

There were a few different write ups of the salt panic this week but the Wall Street Journal’s headline captured it best, “Fearing radiation from Japan, Chinese Rush to Buy…Table Salt?” This one is too good to pass up for story of the week.

In China this week Iodide tablets sold out quickly from most pharmacies leaving the rest of China to get a bit more creative in how it would dose itself if the winds brought Japan’s radiation to the mainland. They settled on the cheapest, and what might seem to be the most practical source, iodized table salt.

I have warned the cardiology department, and we are bracing for a rash of heart attacks over the next week as people try to save themselves from the possibility of a little radiation. 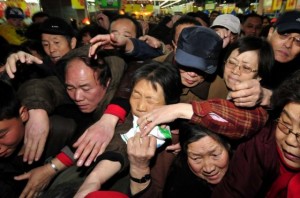 This picture and more about the salt panic on ChinaSMACK.com

I have been working in China for nearly five years now. I have traveled to more than 30 cities and towns, and have lived in 3 provinces. I am interested in issues concerning development in China and the rest of the world. I hope to provide a balanced look at some of the issues facing China as it continues its rise to power.
View all posts by T →
This entry was posted in Current Events, News Story of the Week and tagged China, Iodised salt, Japan, Nuclear power, Panic buying, World Health Organization. Bookmark the permalink.