How Poor Are Chinese Farmers?

Yesterday we saw that China’s farmers occupy the lowest rung of Chinese society. Today we’ll be looking at why China’s farmers are also at the bottom economically, as we try to answer the question, How poor are Chinese farmers?

Officially the average rural income is 5,919rmb, which is about $900. That’s well above the World Bank’s poverty measure of $1/day. However I’m skeptical of these official numbers.

A few months ago I helped the charity I work with edit their annual report and found the annual per capita income for some of China’s least developed areas. 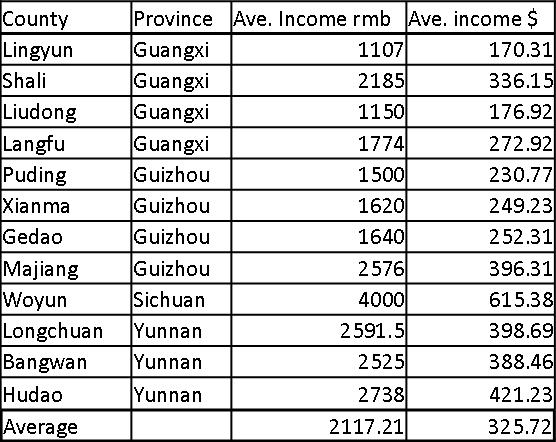 Now keeping in mind that this charity is working in some of China’s poorest areas, it is still surprising to see that none of these villages were closer than 2/3 of what the supposed national average is. Also considering that these are averages, it’s important to remember that even this small amount of wealth is likely concentrated in a few hands.

The average Chinese farm (assuming a 3 person family) is only 1.1 acres. Which in a good year would produce about 6,000rmb (compare this to factory wages).

Reuters reported yesterday that it is now becoming common for migrant workers to loan their land out to their neighbors who stay behind. Their report from Shandong province highlighted a “cheery” woman who was earning 40rmb a day working in another person’s field.

Their idea was that this trend will ultimately lead to bigger farms with richer farmers. I for one am doubtful.

Earlier this week a man from that same province committed suicide after massive losses on his farm. This was not due to blight or drought, but a price drop. Speculators had bet heavily on spring cabbage, which caused the price to go up, and more farmers to plant the vegetable.

Now there is far too much cabbage. Farmers are selling cabbage at .2rmb/kilo, even though it cost them 1rmb/kilo to grow.

Note: there is still food price inflation, about 10%, the cost increase in food is due to transportation and does nothing to help the farmers.

The point of this blog though is to move past the numbers and look at what all of this information means for individuals.

In Guangxi I noticed that the average female college student was only 5 feet tall, and about 90 pounds, in Nanjing it would be hard to find someone that small. The reality is that you don’t even need to look at the numbers to know that the economic gap between the countryside and city is growing, you can see it in the students.

Tomorrow we’ll be taking a trip down to the farm, and I’ll be sharing with you the story behind this blog’s header image.

I have been working in China for nearly five years now. I have traveled to more than 30 cities and towns, and have lived in 3 provinces. I am interested in issues concerning development in China and the rest of the world. I hope to provide a balanced look at some of the issues facing China as it continues its rise to power.
View all posts by T →
This entry was posted in Current Events, Life in China, Rural Life and tagged annual income, China, Farmer, Guangxi, Inflation, Migrant worker, Nanjing, poverty, Reuters, rural china, rural life, Shandong. Bookmark the permalink.

14 Responses to How Poor Are Chinese Farmers?