Health care reform in China, one small step at a time

As the U.S. continues to grapple with what the Supreme Court decision last week will mean for their health care coverage, China has begun to experiment with their own reforms. In the U.S. our policies left millions without health insurance, and individuals struggled with bankruptcy and chronic illnesses. In China, the situation has deteriorated to a point where patients stab their doctors, hospitals have police stations, and demonstrations are held several times a month in front of the public hospital where I work.

The reforms being tried in all of Shenzhen’s public hospitals and one of Beijing’s look to address one of the key underlying issues – over prescription. When China’s health care system began to fall apart in the 1980’s, hospital’s turned to selling drugs to make up for their losses in gov’t funding and drug sales came to make up over half of hospitals’ revenues. This in turn has almost completely destroyed the trust between patients and doctors, with patients assuming that any medication suggested by their doctor might just be a scam and doctors fearing retribution from patients and their families. This reform looks to remove the profit from selling prescription drugs and makes up for the losses with higher consulting fees (which I have long argued are too low; you can see two doctors at my hospital for the cost of taking a taxi, or three doctors for the cost of a double cheeseburger meal at McDonalds).

This I believe is exactly the direction Chinese health care should be moving in, as it  should help restore the trust between doctor and patient (collecting cash filled envelopes from patients and drug companies are two other factors that will need to be addressed). As the People’s Daily story reports, Beijing residents’ health insurance will cover the bulk of the consultation fees, and the cost of medicines have dropped roughly 7 yuan per inpatient, and 235 yuan per outpatient according to Shenzhen’s committee for health, population and family planning (my hospital sees over 2 million outpatients a year, so this is a substantial savings for the public). Patients interviewed for the story reported a savings on medicines from 40-80 yuan, this should be a great financial relief for those suffering from chronic diseases. This will also hopefully reduce the abuse of antibiotics that have been creating increasingly drug resistant illnesses. 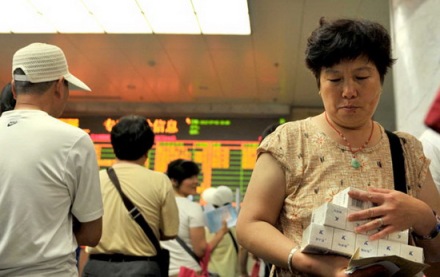 An all too common site at Chinese hospitals.

This step though, is really only beneficial to the people who live in Shenzhen and Beijing, as everyone else is excluded from their local insurance systems. This is an especially large concern in Beijing because many people from other provinces journey to the capital for health care. For them the cost remains roughly unchanged, which was already considered too expensive*, and means that they will either rely on what is largely substandard healthcare in their hometowns or go untreated (which create greater social costs if it is a communicable disease).

Further more migrant workers who lack a hukou will be greatly affected, since it is impractical to return home for health care and too costly to see a doctor, and the result will likely be an increase in illegal clinics. These clinics feature unknown drugs, poor hygiene and staff without medical training; these are the kinds of places that reuse needles and spread disease. Just yesterday People’s Daily reported that a 2-year-old child died in an illegal clinic in Beijing over the weekend. The clinic where the child died was known to the police, the owner had been previously punished for illegally practicing medicine, but they failed to close the facilities. PD also reported that Beijing had an estimated 1,200 illegal clinics as of 2009. A migrant worker interviewed for that story said, “Medicine is relatively cheap at illegal clinics. Public hospitals are expensive for us and it’s not easy to get registered in the hospitals.”

So while this reform is one step that needs to be taken to restore trust in the system, without further reforms it places additional pressure on rural residents and migrant workers increasing the already gaping chasm between the social benefits these groups receive. To paraphrase what an administrator told me, “it is ridiculous to try and create a modern health care system without a modern, national insurance system.” She hopes China will expand insurance options and open up private health insurance systems, even after seeing the mess they created in the U.S. In her view, they would spark the competition needed to cause the bigger reforms in the system. She added that China is a developing country and that it will take time to change the health care system, China’s patients though have already run out of patience.

I have been working in China for nearly five years now. I have traveled to more than 30 cities and towns, and have lived in 3 provinces. I am interested in issues concerning development in China and the rest of the world. I hope to provide a balanced look at some of the issues facing China as it continues its rise to power.
View all posts by T →
This entry was posted in Life in China and tagged Beijing, China, Chronic (medicine), doctor, health care, Health insurance, Hospital, Patient, People's Daily, Public hospital, Shenzhen. Bookmark the permalink.

1 Response to Health care reform in China, one small step at a time